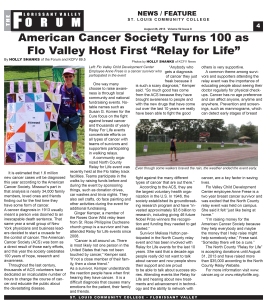 It is estimated that 1.6 million new cancer cases will be diagnosed this year, according to The American Cancer Society. Missouri’s part in that analysis is nearly 34,000 family members, loved ones and friends finding out for the first time they have some form of cancer.

A cancer diagnosis in 1913 usually meant a person was doomed to an inescapable death sentence. That same year a small group of New York physicians and business leaders decided to start a crusade for the control of cancer. The American Cancer Society (ACS) was born as a direct result of those early efforts and this year the society celebrates 100 years of hope, research and awareness.

Throughout the last century, thousands of ACS volunteers have dedicated an incalculable number of hours to change the course of cancer and educate the public about the devastating disease.

One way many choose to raise awareness is through local community and national fundraising events. Notable names such as Susan G. Komen for the Cure focus on the fight against breast cancer and thousands of yearly Relay For Life events concentrate efforts on all types of cancer with teams of survivors and supporters participating in walking relays.

A community organized North County Relay for Life event was recently held at the Flo Valley track facilities. Teams participate in the walks by raising funds before and during the event by sponsoring things, such as donation drives, car washes and trivia nights. They also sell crafts, do face painting and other activities during the event for additional fundraising.

Ginger Kemper, a member of the Roses Gone Wild relay team from St. Rose Philippine Duchesne church group is a survivor and has attended Relay for Life events since 2008.

“Cancer is all around us. There is most likely not one person in The United States that has not been touched by cancer,” Kemper said. “If not a close member of their family, then a close friend.”

As a survivor, Kemper understands the reaction people have when first hearing they have cancer.  It is a difficult diagnosis that causes many emotions for the patient, their family, and friends.

“Anybody who gets a diagnosis of cancer they just freak because it is such a scary diagnosis,” Kemper said. “So much good has come from the ACS because they have brought awareness to people and with the new drugs that have come out over the last 10 years we really have been able to fight the good fight against the many different types of cancer that are out there.”

According to the ACS, they are the largest voluntary health organization in the U.S. In 1946, the society established its groundbreaking research program and have “invested approximately $3.6 billion to research, including giving 46 future Nobel Prize winners the recognition and funding they needed to get started.”

Survivor Melissa Hutton participated in the North County Relay event and has been involved with Relay for Life events for the last 10 years. She said that a decade ago people really did not want to talk about cancer and now people show their support and are proud to be able to talk about success stories. Attending events like Relay for Life and hearing about new treatments and advancement in technology and the ability to network with others is very supportive.

A common theme among survivors and supporters attending the Relay event was the importance of educating people about seeing their doctor regularly for physical check-ups. Cancer has no age preference and can affect anyone, anytime and anywhere. Prevention and screenings, such as mammograms, which can detect early stages of breast cancer, are a key factor in saving lives.

Flo Valley Child Development Center employee Anne Frese is a two-year breast cancer survivor and was excited that the North County Relay event was held on campus. She said it felt “just like being at home.”

“I’m raising money for the American Cancer Society because they help everybody and maybe the money that I help raise might help somebody else,” Frese said. “Someday there will be a cure.”

The North County “Relay for Life” is accepting donations until August 31, 2013, and have raised more than $35,000, according to the North County Relay Website. For more information visit http://www.cancer.org or http://www.relayforlife.org.

Welcome to my portfolio. Thanks for visiting!

Feel free to browse my published articles, podcasts and more.